Owner: The University of Texas at Austin
Architects: BSA LifeStructures

History meets the future in the Anna Hiss Gymnasium at The University of Texas at Austin. Built in 1930, the classic brick building has been transformed into a proving ground for state-of-the-art robotics research. SpawGlass renovated the two-level, 38,456-square-foot South Wing of the historic gymnasium to provide new lab and administrative space for the university’s Robotics Department. Here, students develop technology that could serve the Army Futures Command, which provided funding for the project, in its mission toward modernization of the U.S. Army’s concepts and capabilities.

Bringing this structure into the 21st century while the gym’s North Wing remained occupied with ongoing sensitive operations required a tremendous amount of care and coordination. Many aspects of the historical building had to be protected while demolition, structural work and equipment placement, including low-voltage switchgear,

was performed without causing vibration or loss of power that could affect research activities in the North Wing. Preservation efforts and measures to prevent impacts to building occupants doubled the amount of time many typical construction activities took to complete, and through meticulous planning, the project achieved timely substantial completion on the university’s schedule. As Project Manager Mayur Sethi stated, “You have to have a good superintendent.” To successfully renovate half of this historic building in 10 months, Superintendent Joey Clepper utilized lean scheduling to implement pull plans for multiple areas and stayed diligent with weekly work plans to tackle a variety of challenges. One construction requirement included not putting more than 10 pounds of pressure per square foot on the interior floors. 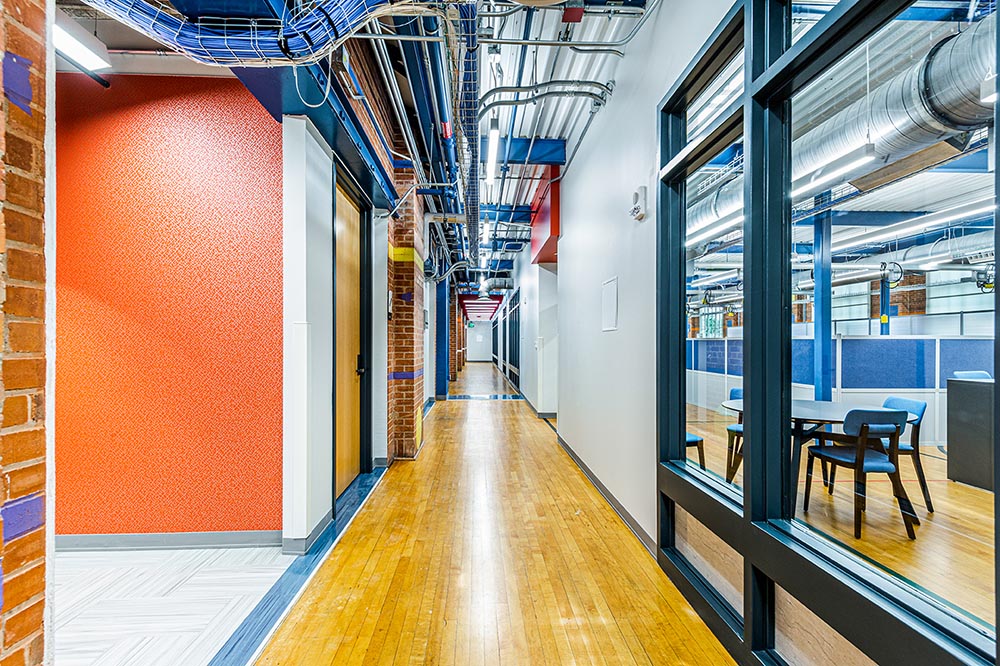 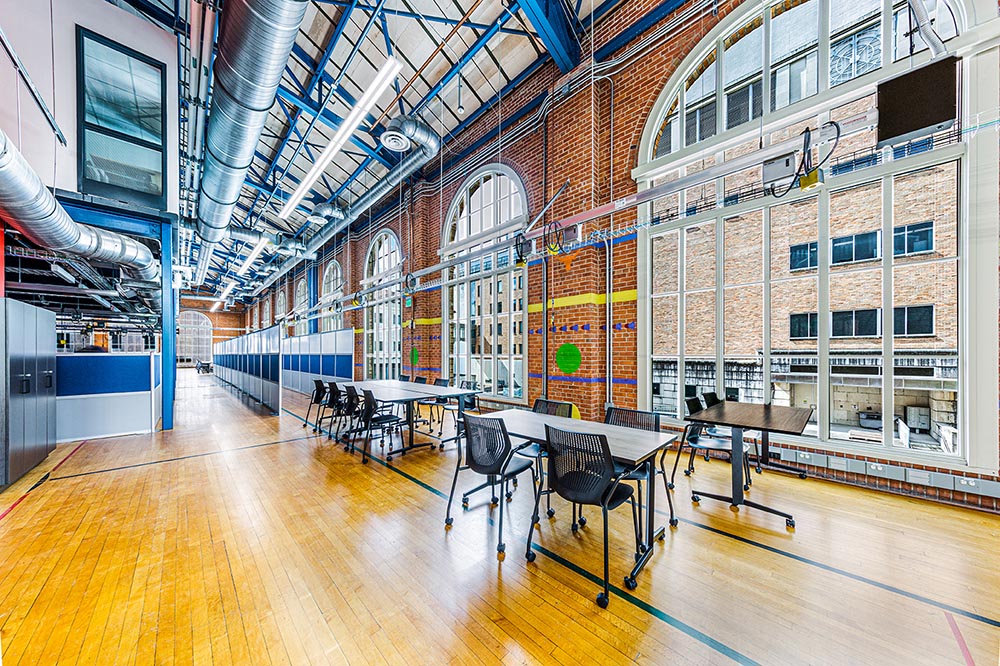 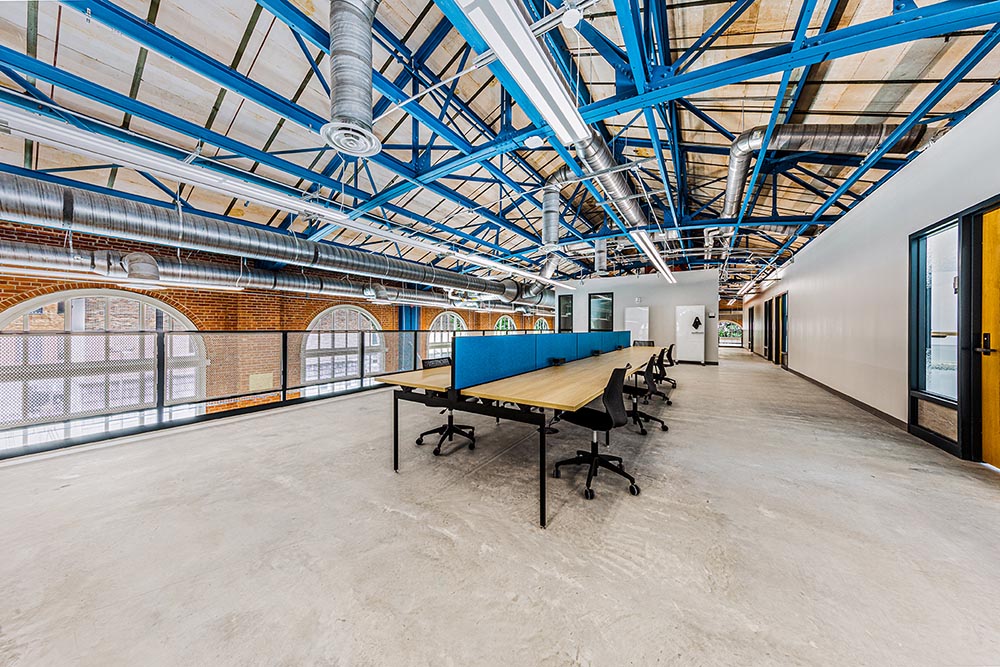 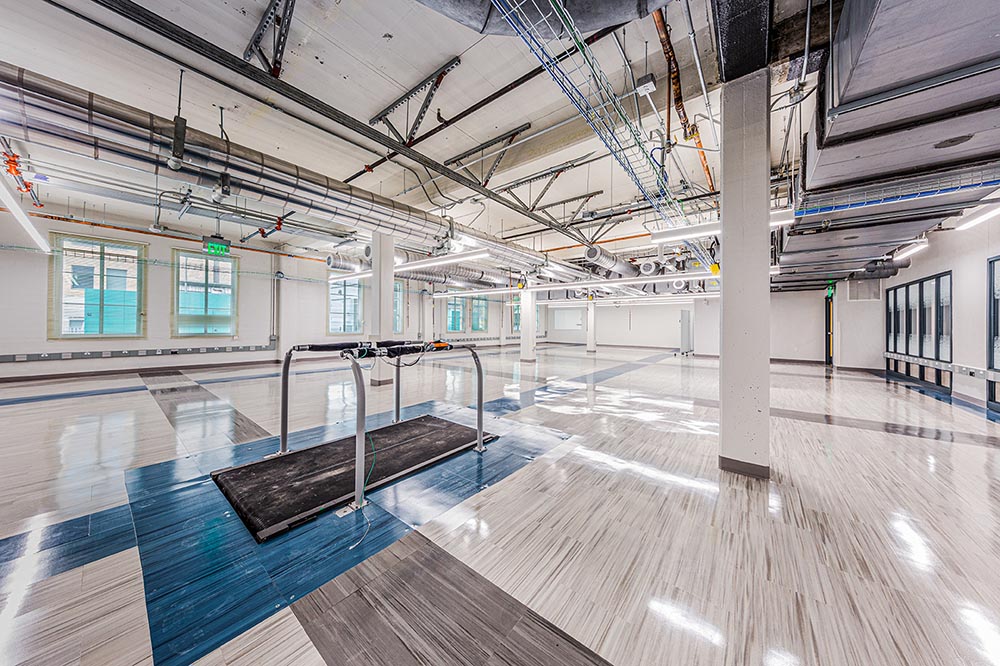 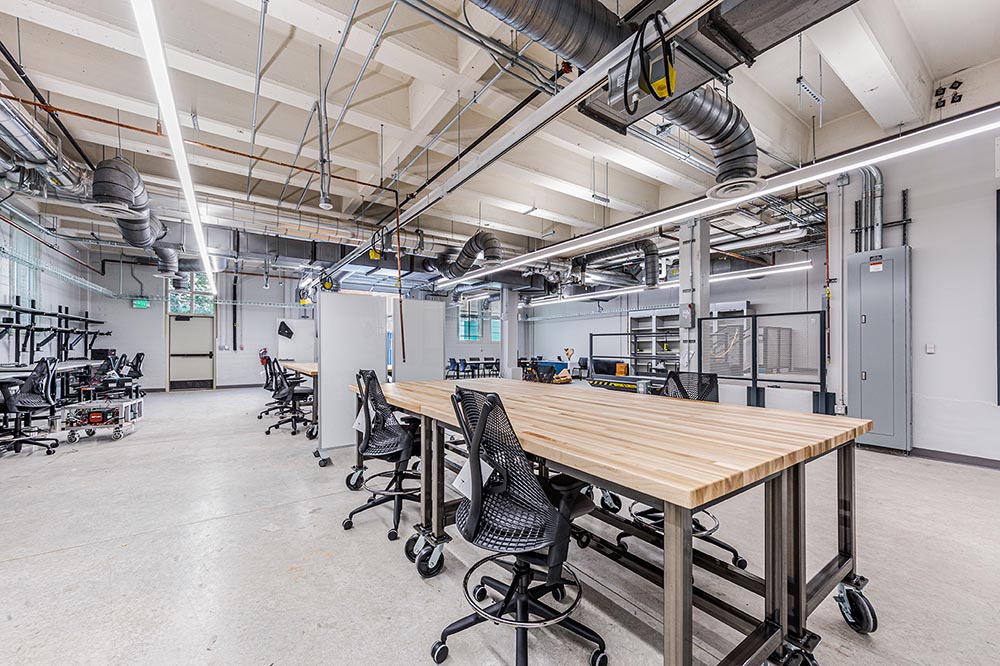 In the gymnasium on the second level, the team had to preserve the original wooden floor while knocking down a brick wall. During demolition, rubber tires and plywood were used to form a shock absorbing layer of temporary protection, successfully preventing any damage to the existing wood floor, which was later sanded and beautifully restored. Preserving the floor and brick walls also posed a challenge in constructing the third level, a mezzanine, to house offices in the double height gym space. Using lifts, the mezzanine structural materials were brought in carefully by removing, and later replacing, the original windows. The largest piece of equipment was the new switchgear, which was brought in through a hole cut for a service entry door, as were two transformers that had to be lifted and set into a pan to protect the flooring. Working with the electrician, we temporarily rerouted power from adjacent buildings to ensure continuous power to the occupied building while the switchgear was commissioned.

With Mayur and Joey leading this historic renovation, successful completion of this quality project was a true team effort that included Assistant Project Manager Ted Fitzmaurice, MEP/Quality Control Coordinator Daylon Dyess and BIM/Virtual Design and Construction (VDC) Coordinator Brian Claxton. After a ribbon cutting in October attended by the Army Futures Command and Governor Greg Abbott, the facility is preparing to lead the way for defense technology, including artificial intelligence, bio defense and drone technology. Meanwhile, SpawGlass has already begun serving in the same role as construction manager-at-risk for the renovation of the Anna Hiss Gymnasium’s North Wing.