Throughout nearly seven decades, SpawGlass has had the opportunity to bring to life many unique projects that benefit communities throughout Texas. The recently completed Bolder Adventure Park in Grand Prairie is certainly amongst our most memorable projects to date.

On a six-acre site within the EpicCentral entertainment district sits a 66,000-square-foot air-supported dome that is sure to bring fun-filled adventures to families around the area. Bolder Adventure Park visitors will be met with an array of approximately 18 adventure-themed park attractions when entering the dome’s airtight revolving doors. While visiting, parkgoers can recreate their favorite westerns within an abandoned mine-themed paint-less paintball arena, go for a jaunt across intricate ropes courses or even strap into a pair of skates to glide across a synthetic ice skating rink, all within the comfort of an indoor facility. Additionally, the country’s first indoor via ferrata route will entice the most adventurous of visitors. Via ferrata, which means “iron path” in Italian, is a climbing route that guides climbers along a protected route through a series of cables and ladders.

The dome itself consists of a polyplastic material that encircles one large grade beam and concrete slab. To ensure the dome stays grounded, more than 100 helical anchors spaced about 10 feet apart dot the perimeter of the structure. Located on the dome’s exterior is a pair of 2,000-square-foot, single-story insulated concrete panel buildings that serve as a commercial kitchen and office space, and an attached vehicle airlock and storage space.

Due to the complexity of the project, several challenges arose during construction that required an approach from the SpawGlass team as creative as the park’s attractions. One of those hurdles was combatting industry-wide material procurement delays for items such as electrical breakers that power various air conditioning units throughout the park and the commercial kitchen. To keep the schedule on track, the SpawGlass team worked to locate and procure long-lead items like electrical breakers from local businesses throughout the Grand Prairie area. 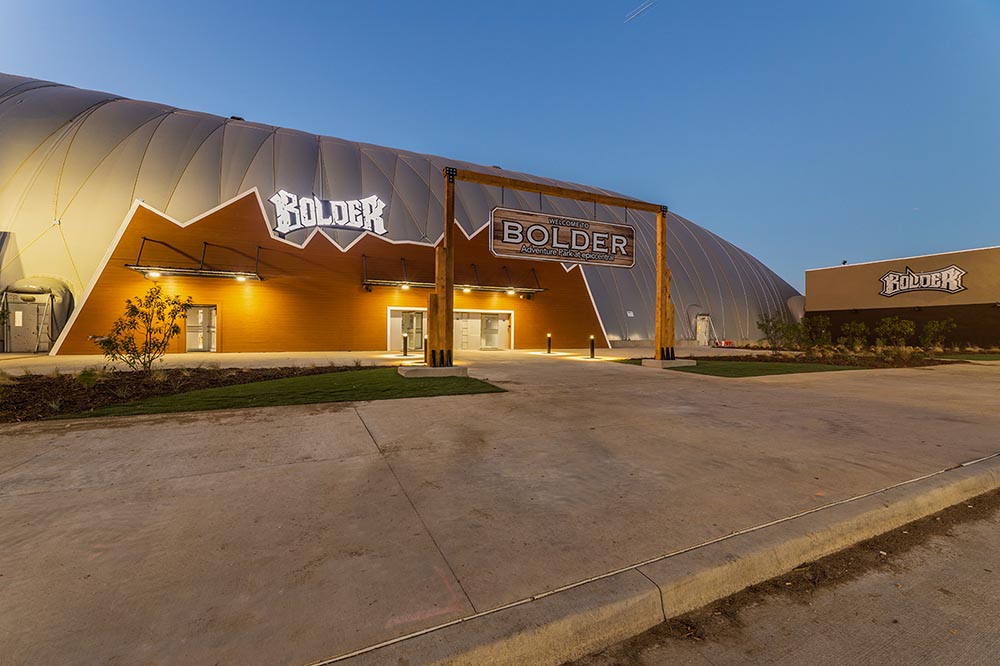 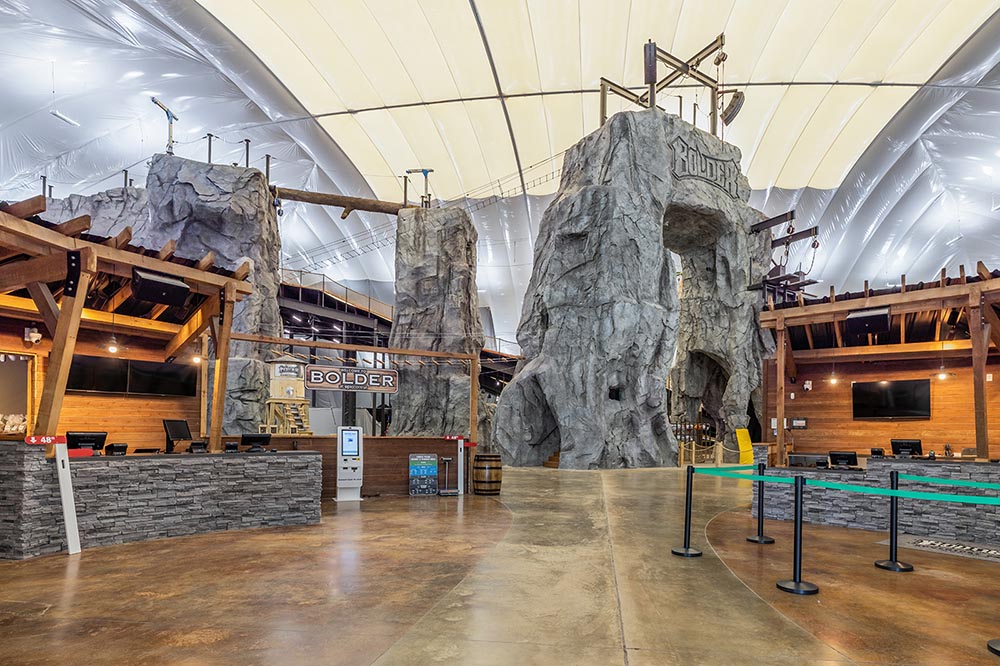 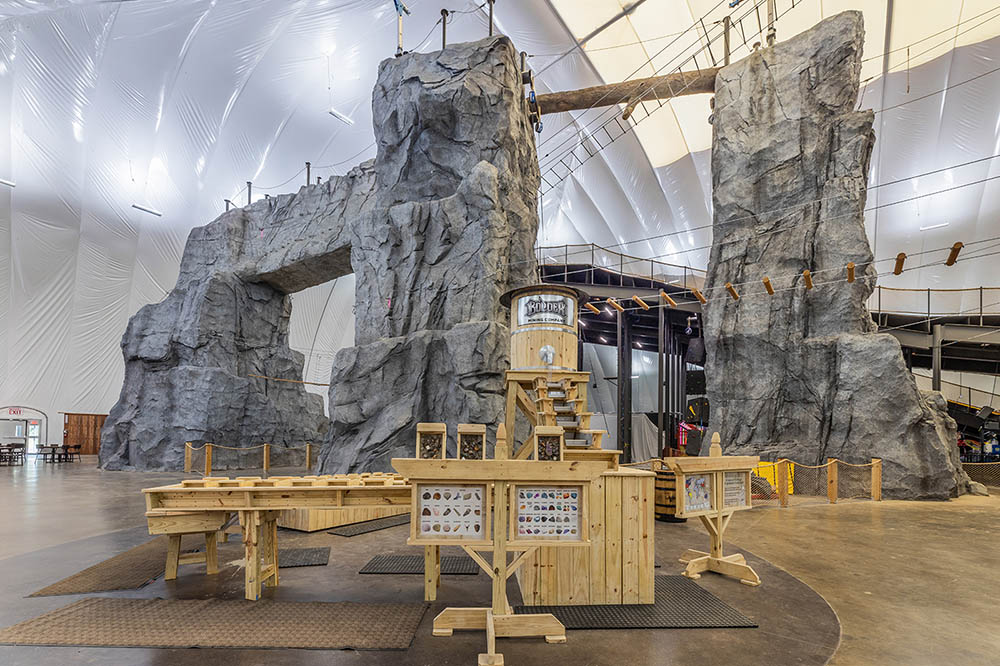 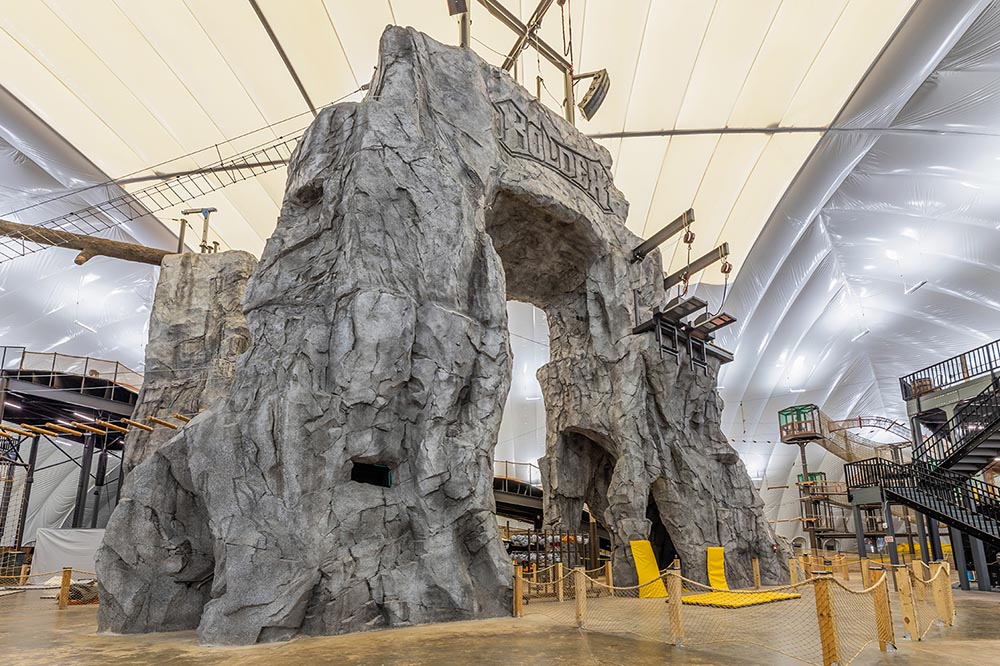 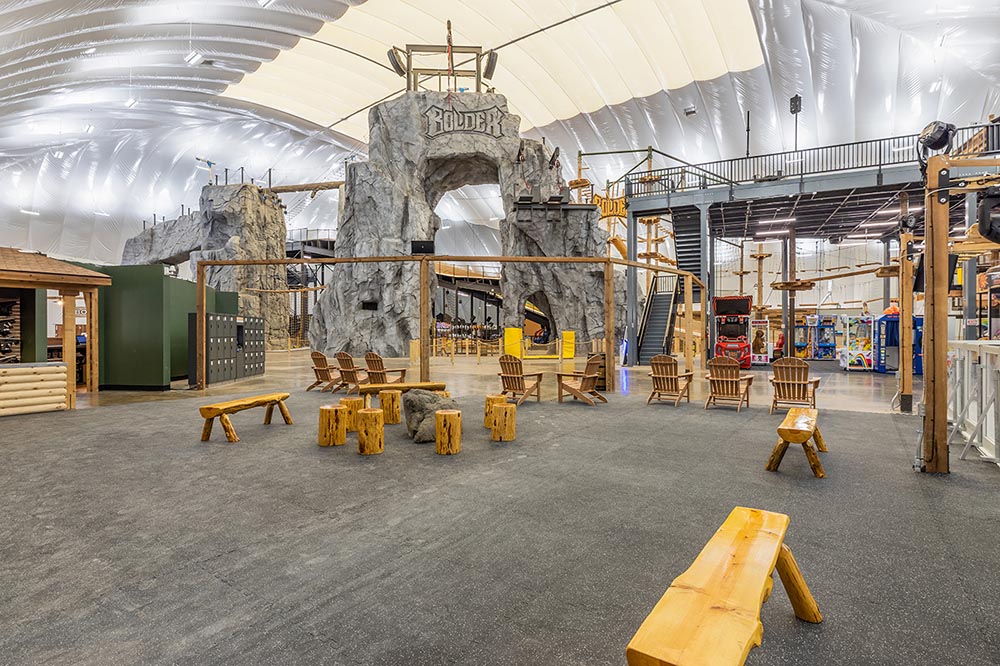 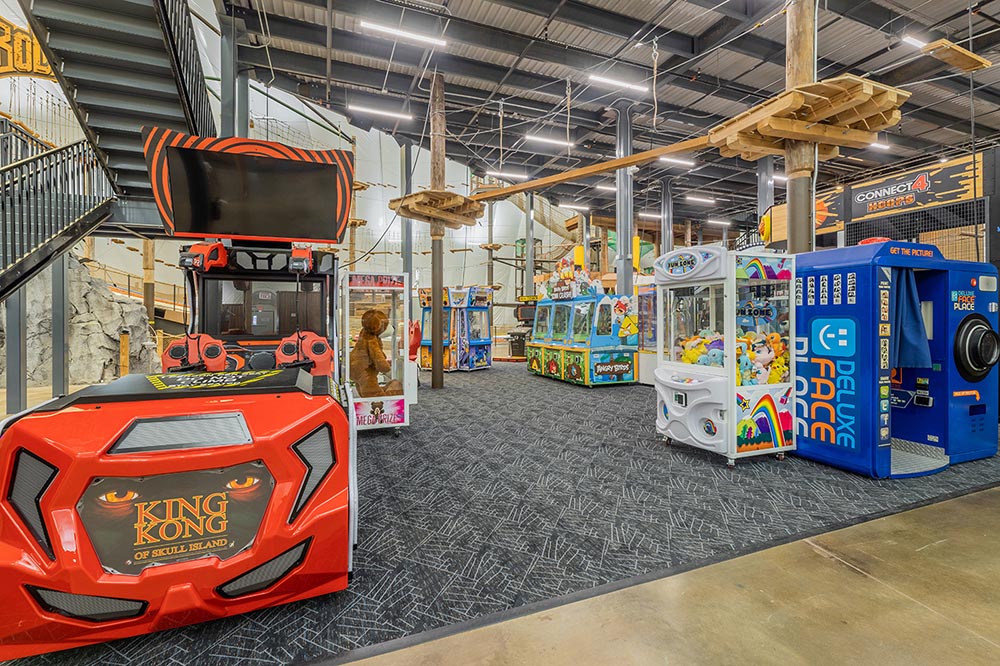 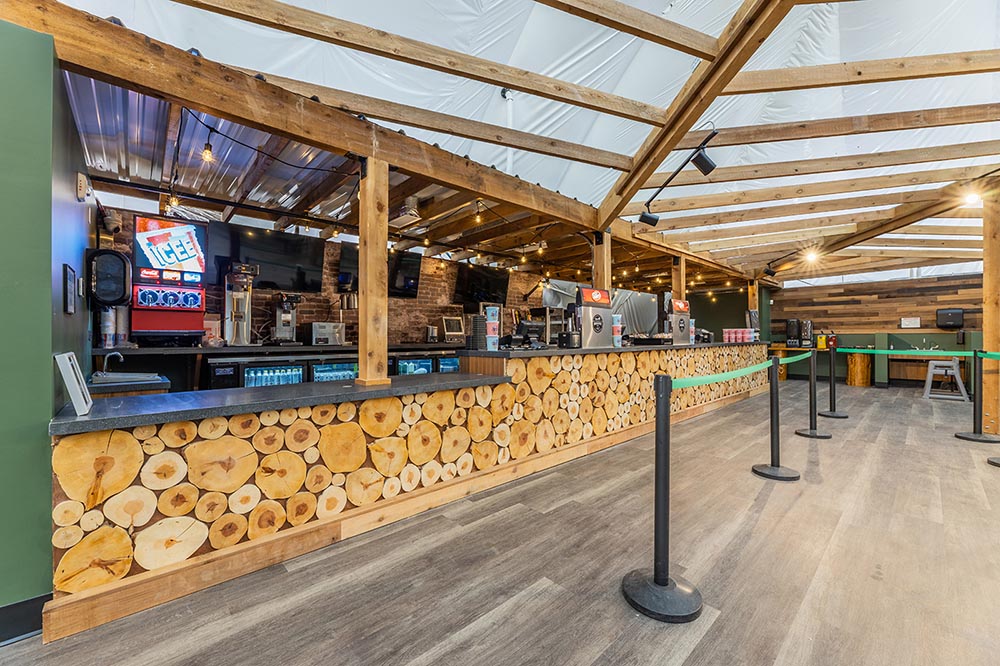 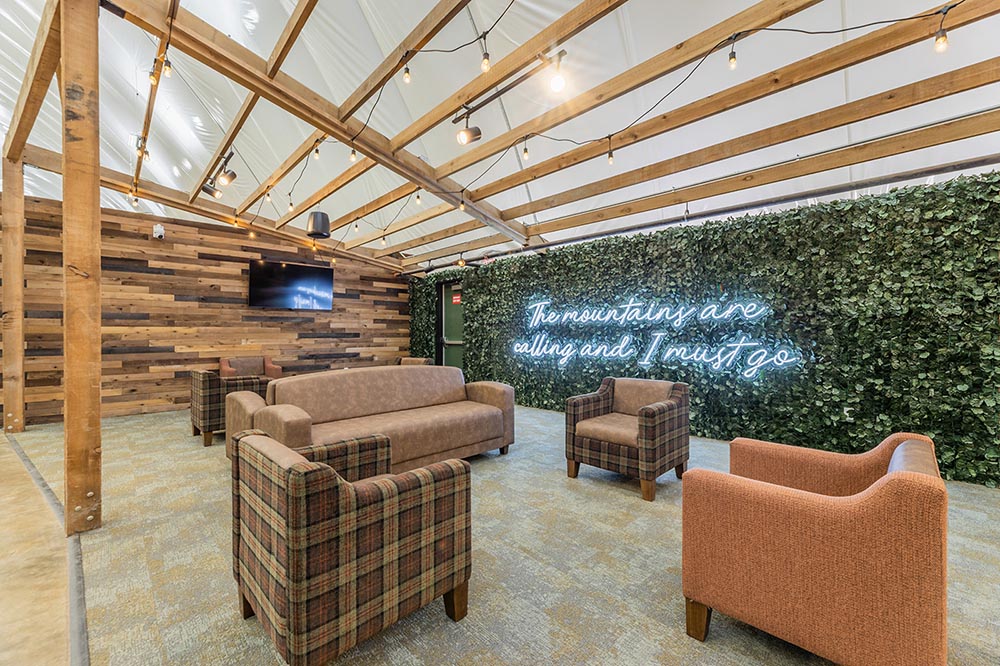 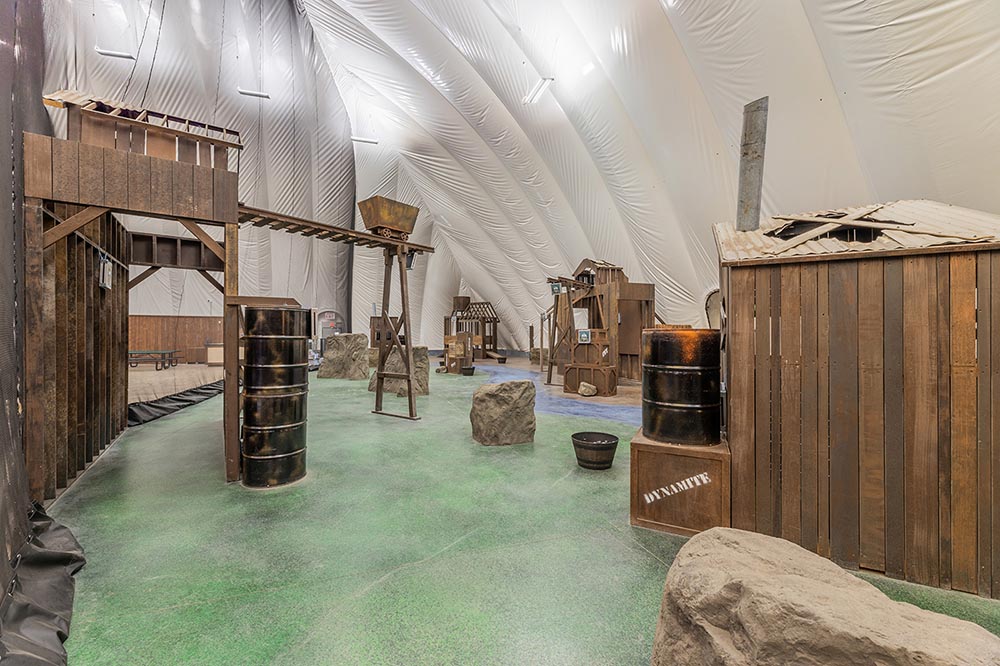 The rock-climbing attractions, including some stretching as high as 60 feet tall, also presented a unique opportunity for Project Manager Cory Thompson to become acquainted with the Grand Prairie Fire Department, who frequently visited the site to pre-plan their rescue response to any incidents once the park opens for visitors. “

The fire department was very curious, and we got to know them well,” said Cory. It was really great to get the opportunity to meet them and work closely with the local community like that. It was a big highlight for me.”

“This is a one-of-a-kind project,” said Superintendent Pearson Randel. “Paul Fontanelli and his team at Bolder are so excited about opening this park to the community. Paul was very hands-on and put his heart into every detail. It’s great to be able to say we played a role in bringing so much enjoyment to the community.”

What began as a 337-bed jail in New Braunfels is now nearly unrecognizable as the newly renovated Comal County Sheriff’s Office… Read More.

Following the devastation left in the wake of Hurricane Harvey in 2017, the Harris County Flood Control District…. Read More.